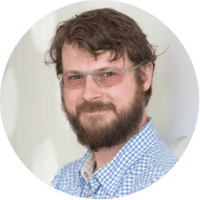 A longtime contributor to Treefrog’s Lasso programming language, Kyle officially joined the Frogs in early 2016 when he moved to Canada from the United States.

Kyle’s interest in technology began at a young age when his father – a former nuclear engineer who served aboard a US Navy submarine – bought him an Atari 800 personal computer. He’s since spent more than 20 years writing software and developing mobile applications. Largely a self-taught programmer with an insatiable curiosity for how various technologies work, Kyle is well versed in a number of programming languages including Lasso, Swift, Java, and C++. At Treefrog, he is responsible for developing customized mobile apps, and collaborating on a spate of other programming-related projects for our clients.

Born in Dallas, Texas, he studied art at the University of North Texas before moving to Scotts Valley, California in the mid-1990s to study part-time while working as a dishwasher at Bethany College. He soon befriended the college’s head of IT, and before long, Kyle was tasked with running the school’s computer network. He was subsequently hired to run the college’s IT department, and he established the institution’s computer labs to provide students with access to the Internet (known back then as the “information superhighway”).

A big fan of Star Wars, Star Trek, and other science fiction shows and films, Kyle spends much of his free time playing video games and reading science journals.