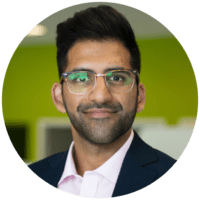 Aamer arrived at Treefrog as a former external auditor and CFO of a group of publicly listed companies. A Chartered Professional Accountant and Chartered Accountant by trade, he has extensive experience as a finance leader for technology companies. Aamer has now focussed on his passion for helping companies reaching their “Bankai” or their strongest version to Treefrog.

Aamer spent much of his youth exploring cultures of the world, having experienced over 45 countries, much as a solo backpacker. Vacation for Aamer always involves a new travel destination and often scarcely planned itineraries; unlike his professional life, he travels chaotically to force the unexpected.

When he is not travelling into the unknown, Aamer spends much of his time: playing sports, none of which he is as good at as he thinks he is, trying to conquer Netflix, and reading encyclopedias (that’s not a typo). He would much rather be at a large gathering of exciting strangers than at home in PJs.