By definition, Reddit is an “American social news aggregation, web content rating, and discussion website” where members can submit content such as text posts, photos, videos, or direct links into sub-categories of Reddit with specific themes and topics (these are called subreddits). The content posted to these subreddits by members is then voted up (up-votes) or down (down-votes) by other members, determining the position of the post. Posts with more up-votes stay at the top of the subreddit, while posts with less up-votes, or posts with lots of down-votes are pushed down towards the bottom of the subreddit. Essentially, just like any social networking and discussion website, posting high quality content will result in more shares, likes, comments, and maybe even conversions.

So far in 2017, Reddit has been bringing in approximately 542 million monthly visitors, 234 million of them being unique visitors, making it the 7th most visited website in America, and 22nd in the world. If that wasn’t enough, in 2015 Reddit reached 82.54 billion pageviews, 73.15 million submissions, and consisted of 853,824 subreddits.

Now that we know what Reddit is, and why it has such great potential from a marketer’s point of view, I am going to share with you my favourite tactics for leveraging Reddit for organic and paid advertising.

Although I don’t have actual experience with targeted ads on Reddit, I’ve seen them in action and I know they work. Reddit offers advertising options where you can actually advertise in specific subreddits, giving the advertiser an opportunity to target specific users with a super relevant ad. This is great because when a user sees a relevant ad in a relevant place, they are more likely to click through and convert. For example, when I was on the /r/adops/ subreddit earlier today, I found two paid ads that would be very relevant to the /r/adops/ community.

The first is a native looking ad at the top of the subreddit, disguising itself as a normal post: 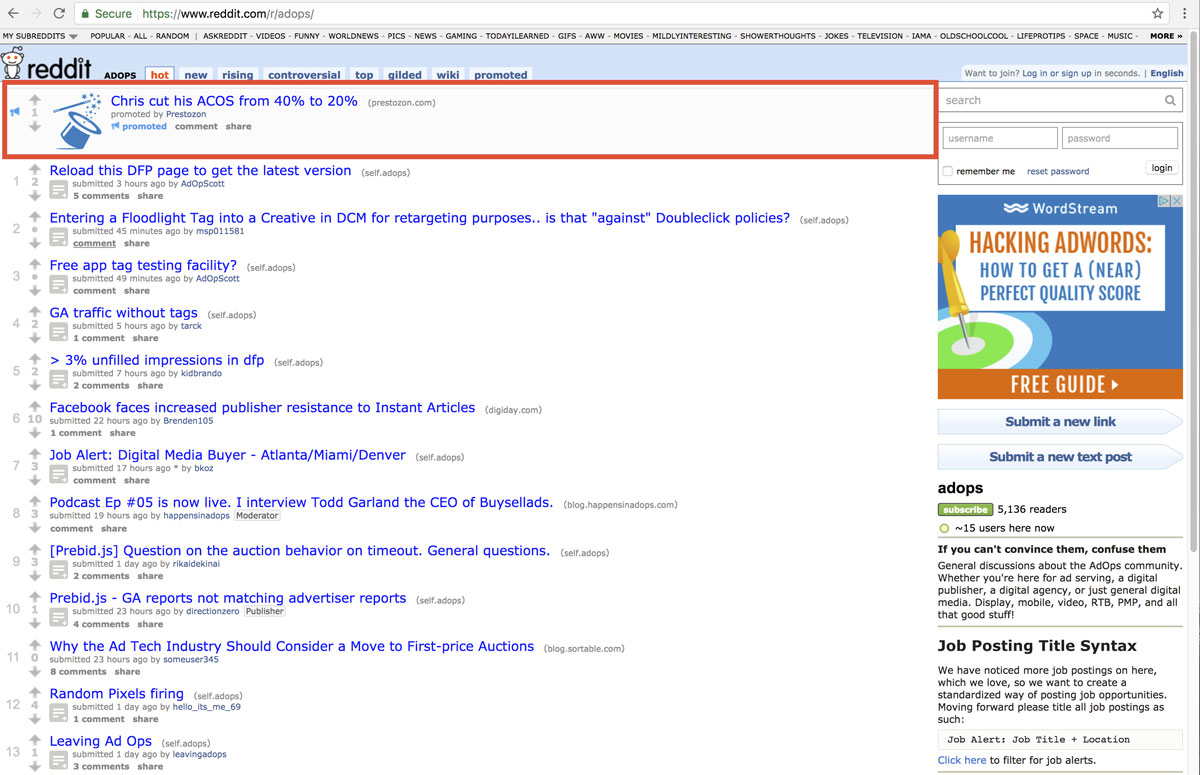 The second ad, featured on the right side of the webpage is not a native ad. It is still however a high quality ad that is very relevant to just about anyone visiting the /r/adops/ subreddit: 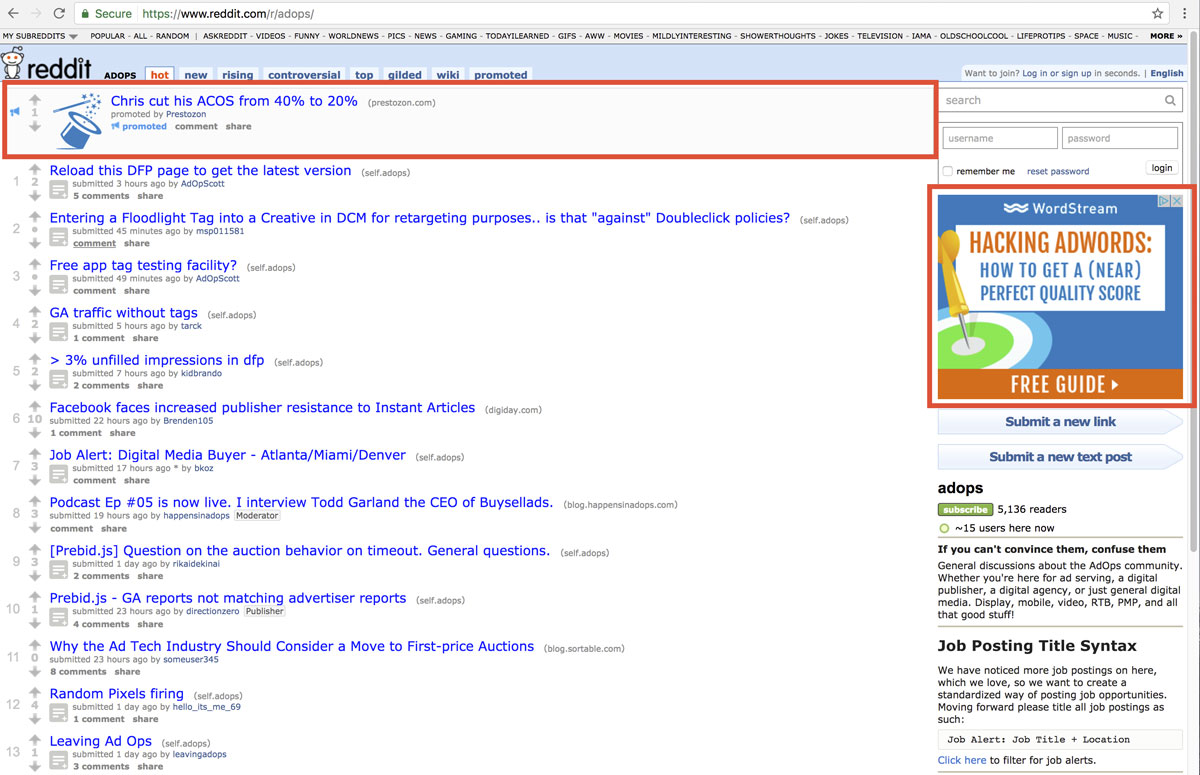 How Much Does It Cost?

In order to advertise on Reddit, advertisers must be willing to spend a minimum of $5 per campaign, and a $0.75 charge per thousand pageviews. Currently, Reddit only offers CPM (cost per thousand impressions) as a cost model, and like Adwords, the CPM price you pay depends on a variety of factors, like targeting, bid, and competing ads. Reddit also allows advertisers to purchase up to 3 months prior to a campaign, so plan ahead!

Another form of advertising that I like on Reddit, and one that I have personal experience with, is organic marketing. One tactic that is arguably the easiest is to position yourself as a thought leader within the subreddit you are trying to advertise on. Let’s say that you are working for a landing page optimization company, and come across a user in the ad operations subreddit looking for information on landing page optimization. You could answer the user’s question and also provide a backlink to the company you work for. Doing this (well) would provide you with authority within the subreddit, which will benefit you should you decide to keep posting, and will drive traffic back to the website you have just linked to.

Organic marketing is trickier to pull off successfully than paid advertising, because like most people on social networking websites, people on Reddit hate ads, even more so when the ads are low quality, intrusive, aren’t relevant, or are ads disguised as regular posts. Failing to follow the rules, or “reddiquette”, you may find your content getting downvoted, and you getting banned. Having said that, there are a number of ways to organically market on Reddit without pissing off all of the people who could be potentially clicking on your ad.

As I mentioned above, Reddit users hate ads and being deceived into clicking on them. There are some things that every company should avoid doing, whether you’re marketing for Starbucks or a local coffee shop.

The big no-no is posting memes. Just don’t do it. If this is the only take away you have from this article, you’ll have still learned something valuable. It’s a risky move that few brands (if any) have managed to pull off without looking incredibly desperate.

One cringe-worthy example that demands a discussion is when Pilot posted a series of memes to various social networking sites in an effort to try to promote their new line of pens. The memes featured slogans like “The only pen that matters” and “I will not lose any of these” that make you want to put your head in your hands. Once they found their way to Reddit, users weren’t happy, and felt betrayed by the user who originally posted the memes, and maybe even by Reddit as a whole. One user even went on to say “Even if he’s [the poster] not paid by the company or an advertising agency, I don’t really want people who are just fans of some brand making accounts just to post about that product. What would Reddit be then?”

I’ve managed to track down a few of the original memes, and have attached my personal favourites. I truly hope you find them as horrible as I did. 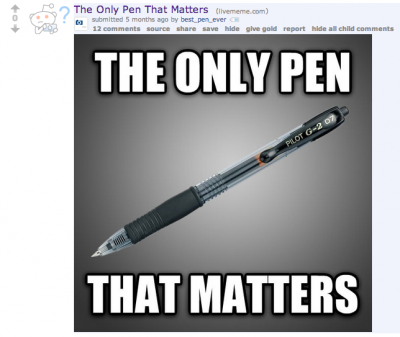 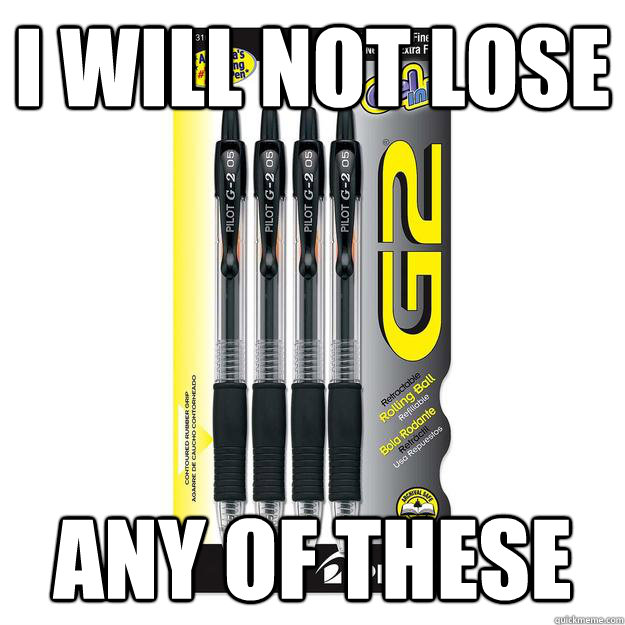 In conclusion, marketing on Reddit is not easy or for the faint at heart. It’s a lively community that offers a huge potential for marketing. If you aren’t afraid of criticism, and are targeting certain niches – there’s really no better place to be. If done correctly, you could be on your way to tapping into a valuable goldmine of targeted traffic directly to your website, while increasing brand awareness at the same time.