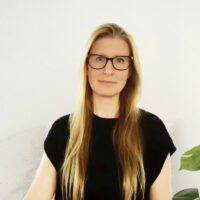 As the Director of Programs for the Treefrog Accelerator, Laurie is helping to push the Accelerator to new heights.

As a kid, Laurie was a competitive equestrian in both riding and driving, competing all over Ontario. She rode every weekend with the “Baker Riding Club”, going for a hack in what was Joker’s Hill (formally owned by Murray Koffler, now by the University of Toronto).

Descended from a family of farmers, political reformers, and civil servants, her family has fed and led the region. With a love for the land, her family was once known for breeding prize-winning Percheron draft horses.

She travelled alone to Denmark at 15 and later to Paris where she spent days in the Louvre sitting and writing in the Marly Court amongst the marble statues. She later visited the Musée d’Orsay and marvelled at Millet’s The Angelus, a print of which hung in her grandmother’s hallway.

Laurie has an undergraduate, Masters, and Ph.D. in Anthropology. She attended Western University for her Masters where her thesis focussed on Canadian Multicultural Policy and integration strategies through an analysis of the international Metropolis Project and its funding of social science research for policy development. Her work traced the links between research and funding through the lens of shifting governmental perspectives around immigration and settlement.

Laurie later completed a Ph.D. in Social Anthropology with two small children while working full time, supported by numerous scholarships. Her dissertation was a synthesis of ideas from the anthropology of technology, religion, and economics added to perspectives from science and technology studies to create something new.

She co-wrote the first ethnography of York University with her mentor, Penny, and has been published in the Canadian Journal of Communications, among other publications. She started her digital marketing career working with the Borderless Higher Education for Refugees project, which brings university-level education to refugees in Dadaab, Kenya.

Once Laurie completed her Ph.D., she did a Post-Doc with Mitacs, a Canadian industry-academic funding agency, in coordination with Treefrog.

She has mentored and led a team of digital marketers that have gone on to do incredible things. Laurie continues to teach Digital Marketing at York University.

She once stopped the car to rescue a bird while in labour with her second daughter, completely to the dismay of her husband.