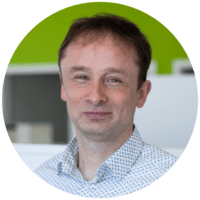 Martin Francis stumbled through his first lines of ‘BASIC’ on a Commodore PET at a school computer club in the North of England. In his first job as an electronic service technician, he worked on two-way radiotelephones, TVs and video recorders. Martin began to notice more computer chips creeping their way into the systems he worked on, so he went to the Merchant Navy College’ where he studied control systems, microprocessors and high-powered radio transmitters.

After opening a coffee shop, and then the ‘The Keswick Kite Company’ (which totally failed to get off the ground…), he moved to London to join a band. He began developing ‘LUCID’ – a computer-controlled stage lighting system for bands with big ambitions, huge drum kits, small vans, even smaller budgets and no road crew. This helped him to get a meeting with the head of computing at the University of Greenwich. He graduated from there two years later with a degree, returning later to lecture part-time at evening classes on the BSc and MSc courses. His next job had him wearing several hats all at the same time, serving as a Software Development Trainer, IT systems manager, and’ Special Projects’ QA Team Lead performing load and penetration testing for various companies in London’s financial district, and occasionally getting to lead small teams of consultants on projects overseas.

After moving to Canada and a brief gig lecturing at Toronto College of Technology, he worked on Mazda Canada’s websites. Meanwhile, after lamenting that no emerging website platforms supported collaboration between different sites, he spent the next ten years developing and marketing ‘Ecclesiact’ – his own website platform for local churches that enables content to be automatically shared in real-time between multiple independent websites.

Although it was tons of fun, it eventually stopped paying the bills, so his wife had him un-quit the day job and start work at Enterprise Car Share. There he worked on their car reservation, tracking and invoicing systems. After several more years with agencies providing custom-built web portals, he found a new home at Treefrog. Martin now supports and represents the immensely talented rockstars who make up our super-elite programming staff.